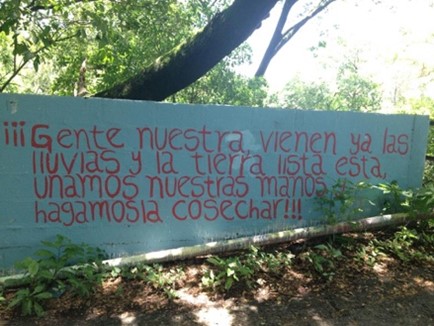 From the Archive: Lucie’s Trip to El Salvador (August 2014) Part I

In the summer of 2014 I had just graduated and was about to go out into the real world, but first, I had the trip of a lifetime to make.

I had become a volunteer for Music for Hope a couple of years earlier through a friend who was also at the University of Manchester. I had always felt a pull towards El Salvador (for some unknown reason) and knew that I would travel there one day, so when our founder, Katherine, asked if I wanted to go, I jumped at the opportunity. Not only was I getting to travel to somewhere on my bucket list, but I was getting to do it for an amazing cause that I wholeheartedly believe in. I could not believe my luck! And I am forever grateful for the generosity of the anonymous donors who wanted to pay for two of Music for Hope’s volunteers to travel to El Salvador. Thank you.

The purpose of the trip was to see Music for Hope’s work in action and to experience Salvadoran life so that, as volunteers, we might have a better understanding of the day-to-day life of our teachers and as a result, make better informed suggestions within the Music for Hope team.

So off we went to El Salvador – myself and Lizzie (who was another of MFH’s volunteers at the time). My parents waved me off, equally as excited and nervous as I was. This was the furthest I’d ever travelled and the most independent trip I’d ever been on. I knew we’d be safe though because Tony Luna was meeting us at the other end and was going to look after us for the 2 weeks we were there.

After a long flight, we arrived at the airport and sure enough, we were met throughout the trip. The journey from the airport took about 40 minutes in the car and it was already dark when we got there. Although we couldn’t see anything, I distinctly remember the smell of that evening as we turned off the main roads and down the long track towards the Bajo Lempa. The air smelt so fresh! Like pine trees and freshly cut grass. Delightful.

The next morning we were woken up at 5am by the cows and the cockerel and as we stepped outside our room, we saw Nueva Esperanza in the daylight for the first time. I had never seen anything like it. Beautiful paintings on buildings amongst corrugated roofs and dirt tracks, whilst the greenery that encased the village stood tall and vibrant. And even amongst all the noise from the wildlife, there was a peacefulness that, growing up in a British town, I had never experienced before.

Tony arrived at the guesthouse to show us around the village and explain how MFH operates within the different communities. We spent the first day exploring and meeting some people from Nueva Esperanza, including Tony Centeno who teaches in the music centre there. He was in the middle of teaching a class of 5/6 year olds in the village’s music space, which again had been joyfully painted. The pupils looked enthused and I was impressed to see so many youngsters engaged at once, and in such a small space too. They were clearly enjoying learning about music and this was the start of me truly understanding just how integral Music For Hope is for so many people in the Bajo Lempa.

Whilst the instruments provided by the project were quite new and in good condition, there were a couple of violins that had been donated which were in some serious need of TLC. Luckily, Lizzie was a violinist and was able to fix them that afternoon when we were back at the guesthouse. As I wrote about what a wonderful day we’d had so far, I could hear Tony C’s students rehearsing across the way. I’m sure I could hear a neighbour joining in too and loved how the sounds of the wildlife just seemed to slot in with the music.

After a day of eye-opening discovery and witnessing the project in action, first hand, it was time for Pupusas – a Salvadoran speciality which is sort of like a savoury pancake filled with refried beans, cheese and meat (optional). We ate at Nueva Esperanza’s pupusa stand almost every night of our stay and it was delicious!

I should mention here that Lizzie and I unfortunately did not speak a word of Spanish so Tony L amazingly acted as translator for us for the trip, as well as general chaperone – a massive thanks to you Tony!

It didn’t matter that we didn’t have language in common because we had music, and music often communicates more than words can.

We spent the rest of the afternoon back in Nueva Esperanza where we bumped into Soledad – the mother figure of the community who initiated peace and equality there. We then went to have a jam with Tony C and one his eldest students, Moises. Between us we played a mixture of bass guitar, piano, drums, flute and violin to explore well known songs and teach each other new songs. It didn’t matter that we didn’t have language in common because we had music, and music often communicates more than words can.

Days 4 and 5 – time with the teachers

We travelled across to the neighbouring community of El Zamoran in a “mototaxi” which is sort of half motorcycle and half mini pickup truck. Brilliant invention. It was here that we met all of the MFH teachers for the first time. We learnt that, as well as teaching instruments they all belong to their own bands too. The teachers filled us in on each of the communities they taught in at the time and we devised a plan that enabled us to see their work in action and so that Lizzie and I could share some of our teaching experience too. We didn’t know what our trip entailed until we got there and our itinerary just sort of unfolded as we went along. I remember being amazed at how laid back everyone was about making plans – a definite sense of “mañana, mañana” – and it was so refreshing! And yet, things absolutely still got done, just in a much more relaxed, less angsty sort of way than the likes of the Brits I felt. There was a lot more love involved somehow. Within just a couple of days the beautiful Salvadoran culture was making me question and reshape my own.

We went to Eneyda’s school where it happened to be a day of celebrating children, so there were lots of music and drama performances to watch. There was so much talent within the school and many of the musicians were multi-instrumentalists, effortlessly moving between piano, drum kit, acoustic guitar, bass guitar, guiro and singing.

Next, we made our way to San Salvador on the most colourful bus I’ve ever seen. Tony showed us the university there and later on there were a series of bands performing to celebrate the revolution of 1975. Each band played a different genre of music – from punk to ska, hip-hop, cumbia and other local Salvadoran traditions that were less familiar to me. It was such a powerful event that supported the fight for peace and justice and is one that will stay with me. Once again, the power of music stood steadfast in its ability to connect and unite. We stopped in San Salvador for the night, ready for the class tomorrow

On our way to the music class the next morning we popped into the central library to have a look around and Tony L helped us write a note in the visitor’s book in Spanish, to help spread the word of MFH a little.

The music classes formed part of the teacher’s professional development that year. The classes aimed to give the teachers a theoretical grounding in music as well as teaching some singing techniques and ideas. The team seemed to get a lot of out of these classes and it was useful for Lizzie and me to see this in progress so that we could take this information back to the UK team. It was also useful for us to see these classes so that we knew the types of workshops we could run.

The teacher team had expressed how much they appreciated us experiencing the Salvadoran culture and just taking each day as it comes. Days 6 and 7 were certainly full of that. After observing some more great teaching in the morning, we helped herd the cows for milking in the afternoon! On horseback! Rigo and Moises tacked up two horses for us to ride with beautifully embroidered leather saddles. Moises, on the other hand, rode bareback with just a blanket, mounting his horse simply by jumping up. Out we rode through what the locals call the forest, but to my eyes it looked more like a jungle, with thin branches hanging down from the canopy above you and luscious greenery beside a flowing brook. We rode through fields and fields of plantation crop where the crops rose way above our heads. Once we’d visited all the fields we had all the cows together and walked them homeward. Moises went on with the cows to the milking paddock while we had to go back and find a pregnant cow that had gone astray. When we found her she had literally just given birth! Rigo scooped up the calf upon his saddle and we walked the new mother and daughter back to the others.

That evening we had yet another delicious dinner at Adela’s of bananas dipped in beans. The following evening we attended a village party in Nueva Esperanza that had been arranged by the young people to raise money for the ambulance service, in case the elders of the village ever needed it. I remember loving being immersed in the vibrant music of Central America and was amazed that everyone knew how to dance! Whether it was cumbia, merengue, or salsa playing, everyone knew exactly what to do. After the party, we stayed chatting with some of the teachers and young people and learnt of the horrors their families had been through during the civil war. I remember thinking how incredibly strong my new Salvadoran friends must be, when they have faced so much tragedy and trauma yet every day, radiate so much warmth and friendliness.