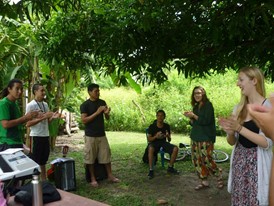 We set off the for the legendary Festival Del Invierno in Perquin, first thing. Perquin is about 4 hours north of the Bajo Lempa, near the border with Honduras, and we travelled by standing up in the back of a pick-up truck with several others who were going that way too.

When we arrived, we were lucky enough to find a little room at the back of a local shop to stay in that night. I had very naïvely expected to turn up and find a festival field, but instead it was a huge stage on a concrete pavilion, surrounded by many market stalls of food and trinkets.

Dragon Negro, who are a band that MFH teacher, Tony, is part of, played a set that evening and it went down a storm. The crowd loved them and rightly so as they’re all excellent musicians! They certainly set the standard for all the acts that followed – a mixture of heavy metal, cumbia and merengue. Again, everyone knew how to dance! It was incredible looking across the huge sea of people and seeing everyone dancing as though they’d all had ballroom training! We danced the night away with locals trying to teach us the right moves and loved every second of it. When the official acts finished, we continued the party by jamming in the streets. We met so many wonderful people this way, including the influential William who was one of MFH’s original teachers.

The next day we went to the Museo de la Revolución which was breath-taking in every respect. The museum commemorates the Salvadoran Civil War (1980-1992) and contains notable wartime artefacts, documents and testimonies from that time. Outside the museum, there’s a massive crater caused by a bomb and historical massacre sites nearby. As you walk up from the museum you can reach the summit of Perquin. From there you get a 360 degree view so you can see Honduras too. It’s beautiful. But to look out over a land that has seen so much hurt bloodshed is sombre and sobering to say the least.

Day 11 was filled with observing our MFH teachers in action. First off, we went to the area where Eneyda teaches. It’s a beautiful space to teach from – a large tiled platform with a roof and no sides, sort of like a giant bandstand. The pupils we saw clearly had lots of respect for Eneyda and practiced hard on their instrument whilst Eneyda was showing some other pupils how to play their part. Once they had all had chance learn and rehearse their separate parts, the pupils came together to put the song together and make it whole. This oral tradition of learning really relies on the musician’s listening skills and it was evident as the song came together how skilled the pupils are at this. Before we left Eneyda’s teaching space, we revealed a piñata for the pupils which they had a lot of fun with. Music for Hope doesn’t simply teach music, it also creates opportunities for pupils to come together and play, as is their right as children, and it was lovely to see this in action; children brought together by music and simply enjoying themselves.

We visited Pedro next in his teaching space which is in a different part of the Bajo Lempa. It looked a little like a mixture between an outhouse at a farm and a small community hall with high ceiling and a stage as the main focal point. We were warmly greeted by Pedro and some of his students who were quite experienced. They played a number of tunes for us, showcasing their excellent hard work and talent and for one song, Pedro’s son who was 6 years old(!) became the frontman of the band. He sang the Spanish version of ‘You’re the one that I want’ from the musical Grease and was absolutely flawless!

To finish off an inspiring day, we headed to the stunning beach and ate Iguana soup for dinner back in Nueva Esperanza!

The plan for these two days was to run two 4-hour workshops with the teachers to share some of mine and Lizzie’s teaching/musical knowledge. We had been planning these workshops during our free time throughout our stay and we took inspiration from everything we had observed, teaching only what we thought might be useful for the MFH teacher team and trying not to bring too much of a Western influence.

Pedro hosted us in the garden of his lovely home and over the two days, we ran sessions on: rhythm, tempo, conducting, scale structure, singing techniques and warm-ups for choirs, listening games, lesson planning, and basic piano, violin and bass guitar skills.

It was such a fruitful couple of days and we all learnt so much from one another. The teachers picked things up rapidly and were so keen to get involved and give things a go. I feel it’s a real strength of MFH that the teachers are always looking to learn more when they are already such distinguished musicians, even Pedro who has been part of MFH from the beginning.

We got back to the guesthouse with a little time to practice a few songs for our farewell party the following day. And just as it was time to go and get our pupusas, the rain came down in an almighty fashion! It was up to our ankles in no time, the lightning was as bright as day but purple, and the thunder didn’t clap, it shot! It summed up our whole trip really as it was like nothing we’d ever experienced before.

On the morning of our last full day we walked to Ciudad Romero, which is a couple of communities along from Nueva Esperanza. Lots of MFH pupils are from this community so it was interesting to see this part of the Bajo Lempa, get a feel for the village and to see more music-making in action. We had seen a vast number of children learning and participating in music throughout our stay and each child we saw was engaged and motivated to learn, clearly enjoying themselves in the process. It was heart-warming to witness this again on our last day, as we had done throughout the trip.

The last night arrived and with it, crowds of people from different communities, many of whom we’d never met. They’d all come to the guesthouse for our farewell party. Various different groups had been rehearsing to come and perform and each of them were just fantastic! The evening consisted of group after group performing, mainly MFH students, but some adults from neighbouring communities with their children too. Lizzie and I performed a couple of numbers. Our music was vastly different from everything else and we definitely felt the Salvadoran musical traditions were much better at creating a party spirit. It was nice to share nevertheless.

Even to this day, I don’t think I’ve ever experienced so much creativity and vitality in one evening. I never wanted it to end. But end it did and with it, so did our trip. We went to bed smiling and woke up not wanting to leave the beautiful Bajo Lempa where we had made so many wonderful new friends and experienced, learnt and shared so much. We loaded our luggage into Lewis’ car and as we left for the airport, reluctantly waved goodbye to the Bajo Lempa with its welcoming culture and warm people, feeling incredibly grateful for the once in a lifetime opportunity to visit the home of music for hope.